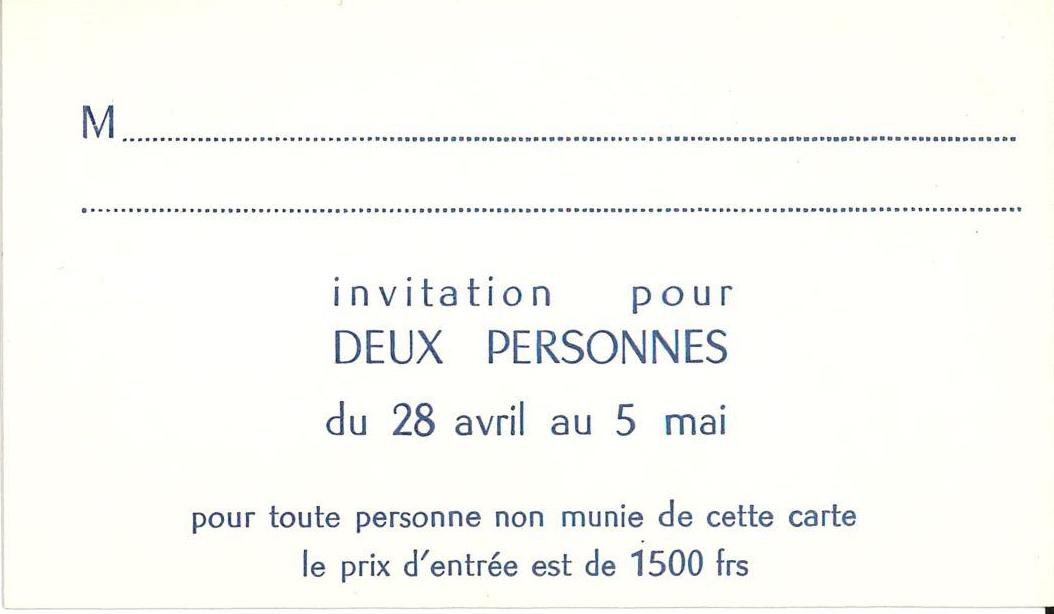 Further Information: In his second exhibition Le Vide (emptiness) at the relatively new Galerie Iris Clert, Yves Klein chose not to present any works of art, but to simply paint the walls in white, letting the strong neon lights beam onto the empty space. Clert organized for two officials from the Republican Guard to act as bouncers, protecting the gallery doors from approximately 3000 guests keen to attend the show’s opening. The invitation card shows a text by Pierre Restany, who had cooperated with Klein for many previous and forthcoming exhibitions. In this text, Restany invites guests to participate in a “manifestation of a perception synthesis,” which would legitimize Klein’s “painterly search for an ecstatic and direct emotion.” After 1960, Klein and Restany jointly founded the Klein Bureau, responsible for establishing a patent for Klein’s color, International Klein Blue.

Images: Images of the invitation and all other archival documents shown on this page are part of the online collection of Archiv der Avantgarden, Staatliche Kunstsammlungen Dresden. The photo of Arman’s multiple “FULL UP” is by Anna-Lena Werner, taken at the private collection of Egidio Marzona in Berlin.

Two years after Klein’s minimalist show Le Vide, the French-American artist Arman, in response, held an exhibition at Galerie Iris Clert that he titled Le Plein (Full Up). Arman instead filled the entire gallery space with garbage. Correspondingly, the exhibition invitation was stuffed in a sardine can filled with trash and handed out as a multiple edition of 1500. The image below shows the sardine can from the private collection of Egidio Marzona in Berlin.

One year prior to Yves Klein’s legendary performance Le Vide at Iris Clert, he collaborated with Pierre Restany on his exhibition Yves: Propositions Monochromes, which toured three locations in 1957: Galerie Apollinaire in Milano, Galerie Alfred Schmela in Düsseldorf, and Galerie One in London. It was the first collaboration between Restany and Klein and could, retrospectively, be described as an early example of the relation between an artist and what is today known as a curator or an exhibition organizer.

Open from January 14, 1961 at 4 p.m. (the opening was moved due to a strike in Belgium) until February 26, 1961, Klein’s exhibition Monochrome und Feuer showed a new cycle of his work. On the invitation, the sentence “Die Gas-Feuerflammen brennen” indicates that the exhibition will show Klein’s burned works, for which he treated canvas with fire. On the occasion of its opening, the city’s orchestra played Monotone Sinfonie: Stille, based on Klein’s directions.