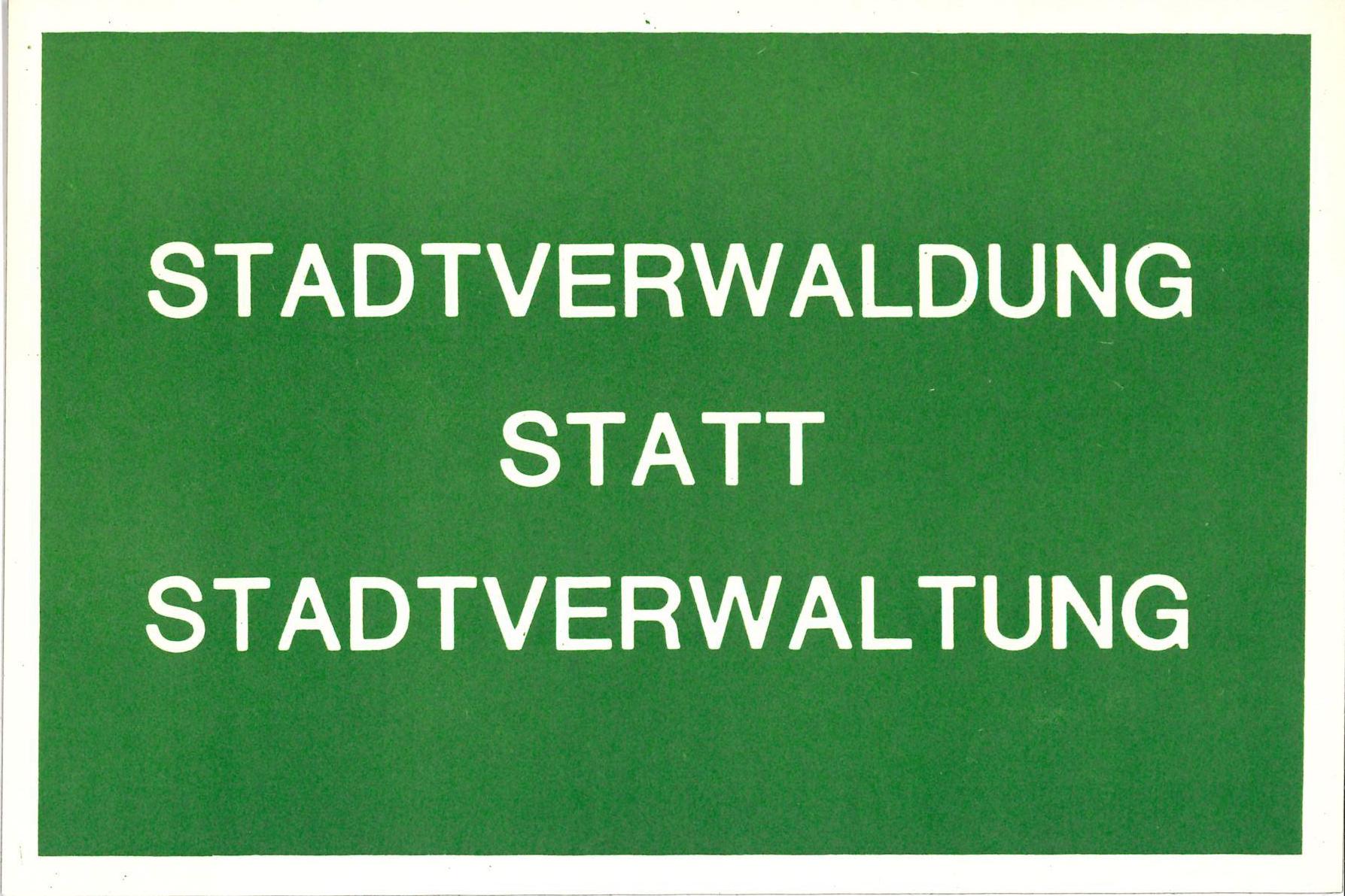 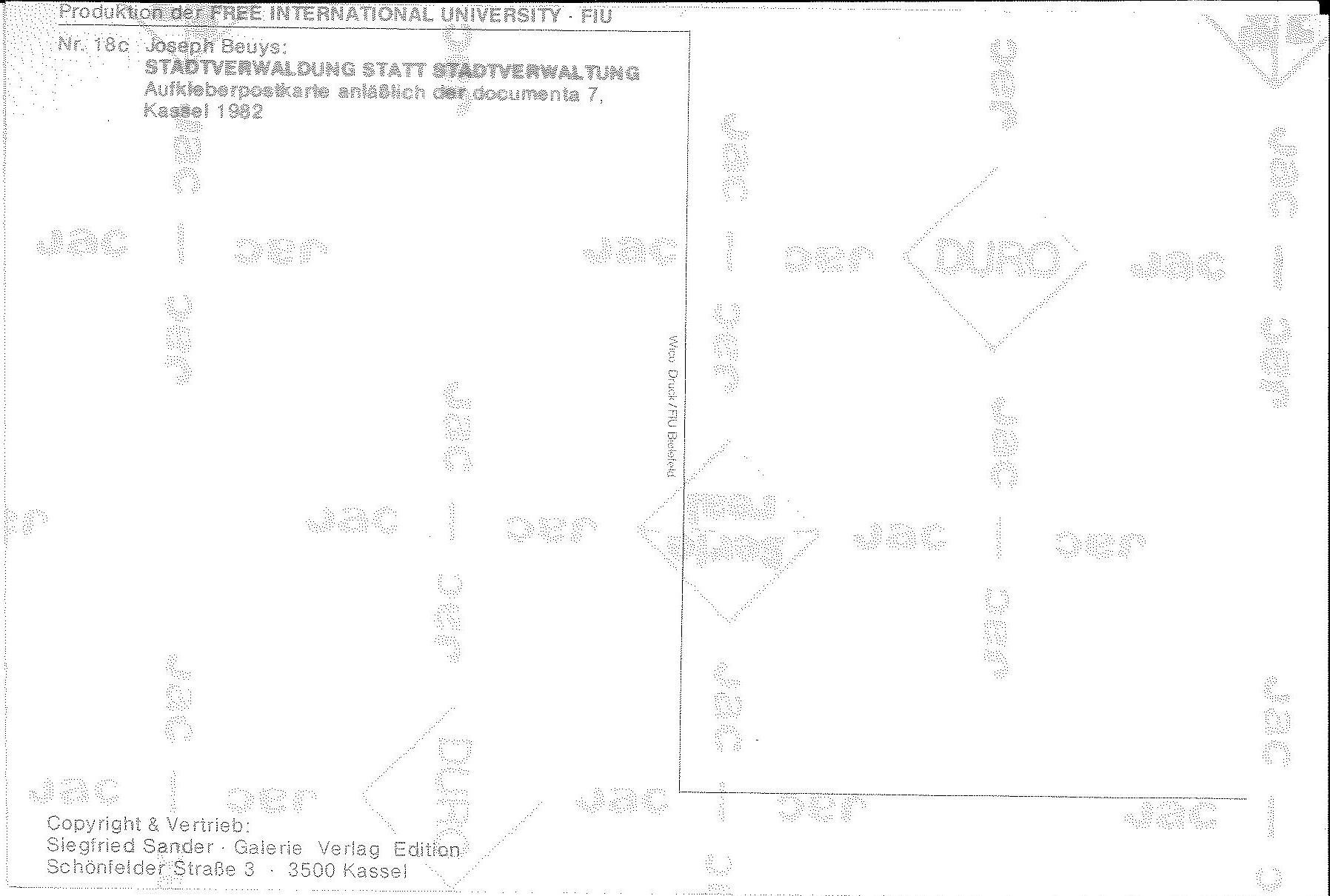 Further Information: Stadtverwaldung statt Stadtverwaltung (city forestation instead of city council), also often referred to as the 7000 Oaks project, was Joseph Beuys’ contribution to documenta 7 in 1982. He proposed planting 7000 oaks in the city of Kassel over a period of four years, until the next documenta. A stone was embedded next to every tree, in order to make visible all the new trees. Art, in Beuys view, was complete if it merges with nature—if there is no difference between art and reality, or if art can participate in political and environmental debates. This is what he imaged as a “social plastic”—when everything, even relations, become works of art. Although 7000 Oaks received international recognition and was meant as a gift to the inhabitants of Kassel, many of the local citizens were unhappy with the environment and vandalized, replanted, or removed trees and stones over the years. In 1996, fourteen years after the first tree was planted, a report showed that more than 200 trees and more than 300 stones were missing. You can see further reactions and reviews in the box to the right.

Further Links: The 7000 Oaks Foundation provides a chronology, further material, and images of the project, as well as still directs its development. Their website can be visited via www.7000eichen.de

Images: Images of the invitation and all other archival documents shown on this page, apart from the videos, are part of the online collection of Archiv der Avantgarden, Staatliche Kunstsammlungen Dresden.

In 2017, the School of Art and Design in Kassel and the 7000 Oaks Foundation created a film to document Joseph Beuys’ 7000 Oaks project, showing how the work was initially received and its legacy today. The film was realized by Fabian Püschel with Johannes Stützen (Free International University), Hans Eichel, Rhea Tönges-Stringaris, and Rein Wolfs.

Distributed by the Dia Art Foundation and organized by Beuys’ Free International University, the letter below encouraged the addressee to donate money for Beuys’ 7000 Oaks project. Explaining that every tree, including the stone, the transport, and the planting would cost 500 Deutsche Marks, every donor would get a stamped and signed donation confirmation by Joseph Beuys and a “tree diploma”. The Dia Art Foundation pre-sponsored Beuys’s project with 300,000 Deutsche Marks, while project was estimated to cost around 3.5 million Deutsche Marks in total.

The Archiv der Avantgarden holds many press clippings featuring reactions to Joseph Beuys’ 7000 Oaks project. This review by Monika Zimmermann published on July 10, 1982, in Frankfurter Allgemeine Zeitung is titled “Irrgarten” and condemns the project, like most other reviews from the early 1980s, as obsolete and hubristic. One major criticism was that Beuys gave 7000 stones and 7000 trees to the inhabitants of Kassel as a “present,” about which most of the inhabitants were not amused at all. In an act of protest, angry citizens painted many of the layered stones pink, which Beuys then, according to the article, had removed at a cost to the city. Zimmermann concludes that it is only possible to talk about, but not with, Joseph Beuys.