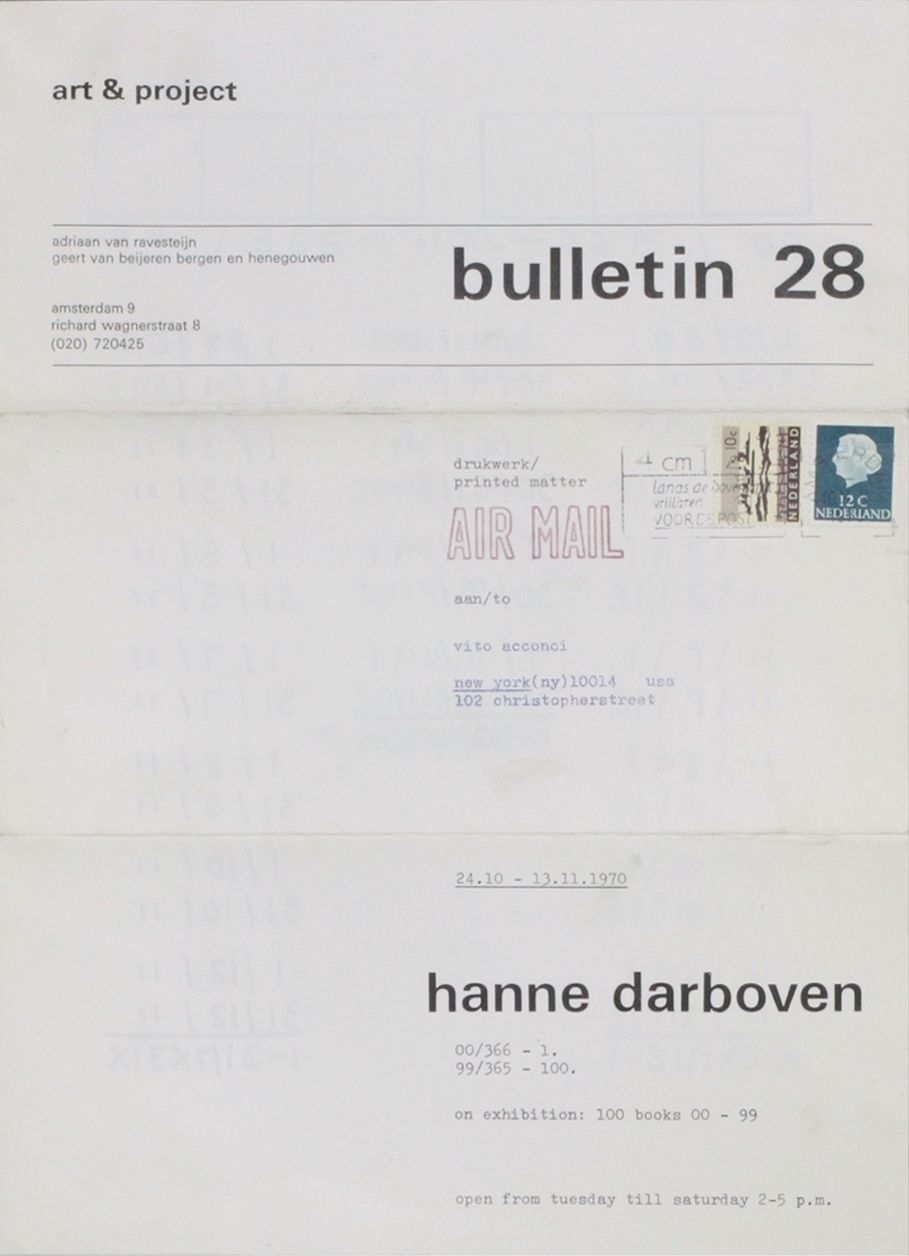 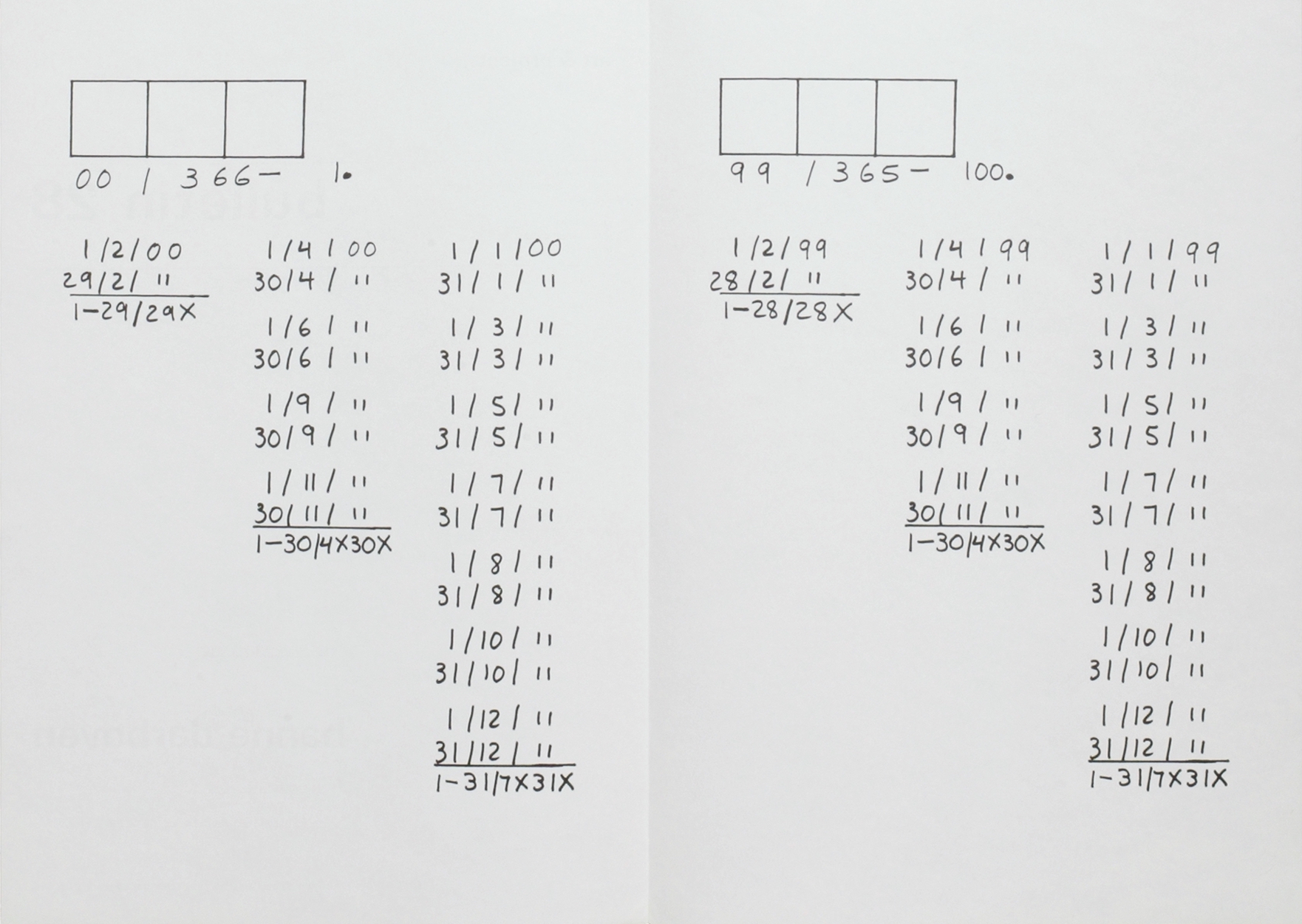 Further Information: The art & project gallery, open between 1968 and 2001 and led by Geert van Beijeren & Adriaan van Ravesteijn, was a very influential art space, particularly for the conceptual art movement. Each invitation was sent in the form of a numbered bulletin—a format the gallery kept until 1989, with a total of 156 editions. Almost all of the bulletins have the same format and layout: while the front offered information about the show, the inside was typically designed by the exhibiting artists themselves and thus functioned as an editioned artwork.

Before leaving for New York in 1968, Hanne Darboven studied at the Hochschule für bildende Künste in Hamburg. In her years in New York, she met many minimalist and conceptual artists such as Sol LeWitt, Carl Andre, and Joseph Kosuth, as well as the gallerist Leo Castelli—with whom she remained in close contact for many years. Affected by the exchange with fellow artists, Darboven created her first constructional drawings on graph paper, based on calendar entries and dates.

The exhibition at art & project was Hanne Darboven’s first solo show outside Germany. Although it didn’t attract many visitors during the three weeks, it turned out to be a significant step in her career. For this show, the young artist selected one of the approaches from her Six Books about 1968 and 1969 (Sechs Bücher über 1968 and 6 Manuskripte “69”), she developed in the two previous years. The books, each 366-pages long, contained different approaches towards the representation of time. For art & project, Darboven expanded her analysis to the room-size installation 100 Books 00–99. The exhibition visitors were confronted with one hundred books—one book for one year of the century, divided into four categories of months after the amount of days they represent (28, 29, 30, 31). Darboven visualized each month with a calendar square accompanied by one of her calculations. The curator Cathleen Chaffee commented on this exhibition as following: “Darboven’s 100 Books 00–99 suggests in its scale the enormity, and perhaps inaccessibility, of history as it is collected in books and other traditional media. Each day of a century is presented both as an individual page in an epic library and as a simple graphic notation in a larger system.” (See In & Out of Amsterdam: Travels in Conceptual Art, 1960–1976, ed. Christophe Cherix, 2009, p. 64).

After her first solo show at Konrad Fischer Galerie in 1967, Darboven quickly gained international acclaim, taking part at documenta 5 in 1972 and documenta 6 in 1977. Continuously experimenting with numbers, codes, and music scores, the artist represented Germany at the Venice Biennial in 1982.

A short film by Freunde der Nationalgalerie by Staatliche Museen zu Berlin (in German) gives a short insight into Darboven’s practice, made on occasion of a retrospective show dedicated to her correspondences with other artists from the early minimal and conceptual art movements: https://www.youtube.com/watch?v=vxfhYLCe2iU

Another short film, produced by Haus der Kunst in Munich and Bundeskunsthalle Bonn also presents her work in a short film, available via https://www.youtube.com/watch?v=EnJ15MUrsaY

Images: All images from this invitation and other examples of art & project invitations on this website are part of the Sammlung Marzona, Kunstbibliothek – Staatliche Museen zu Berlin.