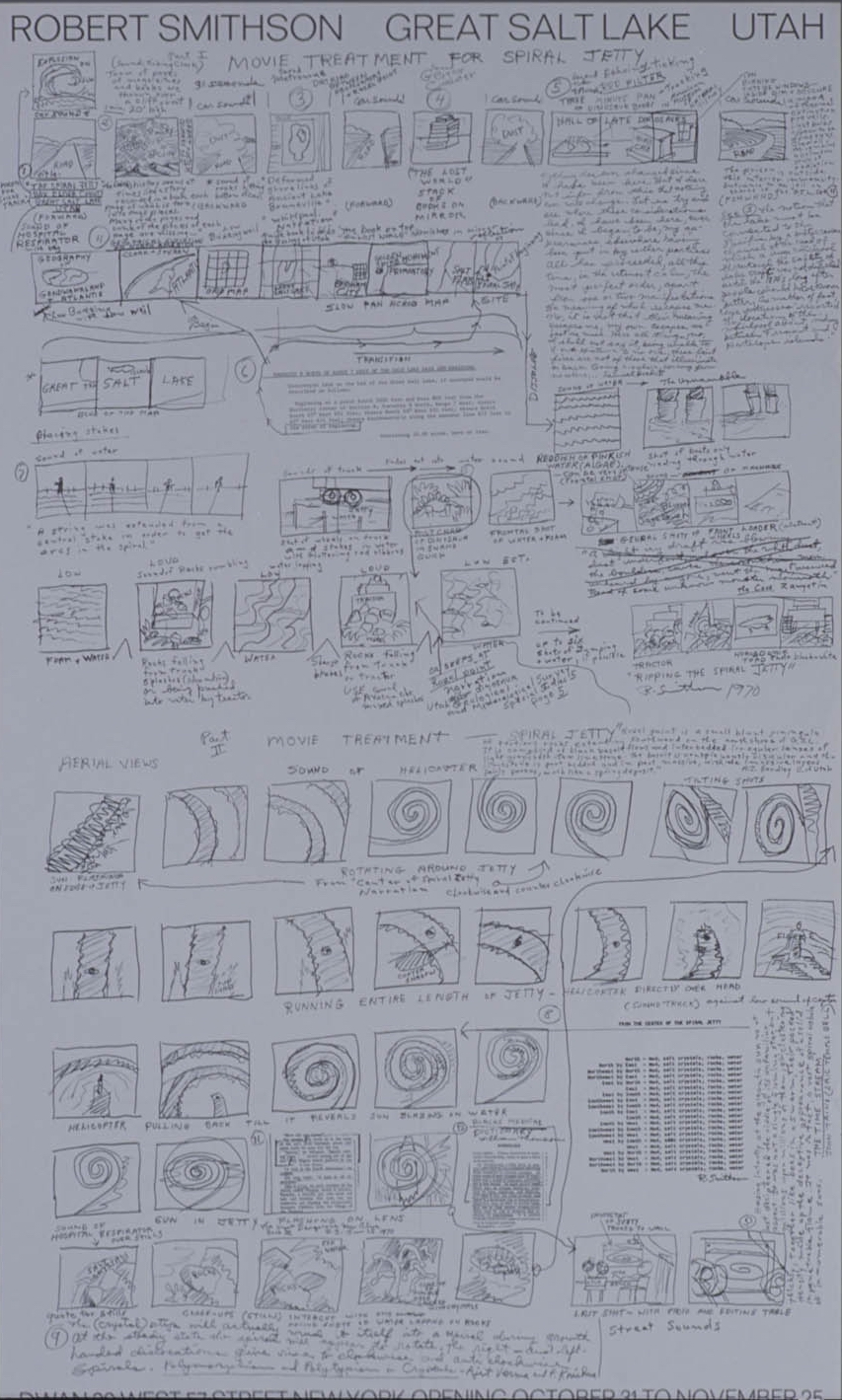 Further Information: One of founders of land art, Smithson archived his most successful land artwork Spiral Jetty in 1970. Inspired by the notion of entropy, the work consists of a spiral-shaped earthwork made of basalt rocks, mud and, later, salt crystals. The work was embedded in the Great Salt Lake in Utah in close proximity to an oil jetty that affects the wildlife and environment surrounding it. The construction took several days and Smithson documented the process with the movie Spiral Jetty (approx. 30 min.). Spiral Jetty was donated to Dia Art Foundation in 1999. Since its first creation, the state owners of the earthwork have faced several issues regarding its preservation.

Founded and led by Virginia Dwan, Dwan Gallery was based in in New York and in Los Angeles and opened in 1959. Dwan predominantly financed the creation of Spiral Jetty.

In 1980 she said of Smithson, “You want to know what was most important about Bob? Well, I don’t know. All I do know is that he had this—call it an uncanny ability to take the most mundane things and make them seem-well, make them seem fantastic and intensely exciting. Like the Golden Motel, for example, that nowheresville kind of place with linoleum rugs and strange heaters up high on the wall. To Bob the Golden Spike was not a dump, it was an adventure, a place of mystery, so strange and exciting one would swear he was in a science fiction world. He communicated this idea, he made those around him feel it, and I guess that’s what was so exciting about Bob and his work. It took me a while to catch on to it, his work. It appeared so cool and rational—cold really, and yet there was this other quality, kind of underneath like a subtle wit, a slow almost sardonic ha ha. I guess that’s what was important about Bob–this other quality that was not exactly on the surface, and yet was there all the same, especially in his personality. (Dwan quoted in Robert Hobbs, “Smithson’s Unresolvable Dialectics,” Robert Smithson: Sculpture, 19–30, 1981, p. 20. Virginia Dwan from a conversation with the author, January 1980.) More about Virginia Dwan via www.artforum.com/interviews/virginia-dwan

Images: All images from this invitation and additional material are part of the Sammlung Marzona, Kunstbibliothek – Staatliche Museen zu Berlin.

The invitation below was designed for a show by Robert Smithson in 1962, held at Castellane Gallery in New York. The object is part of the Sammlung Marzona, Kunstbibliothek – Staatliche Museen zu Berlin.