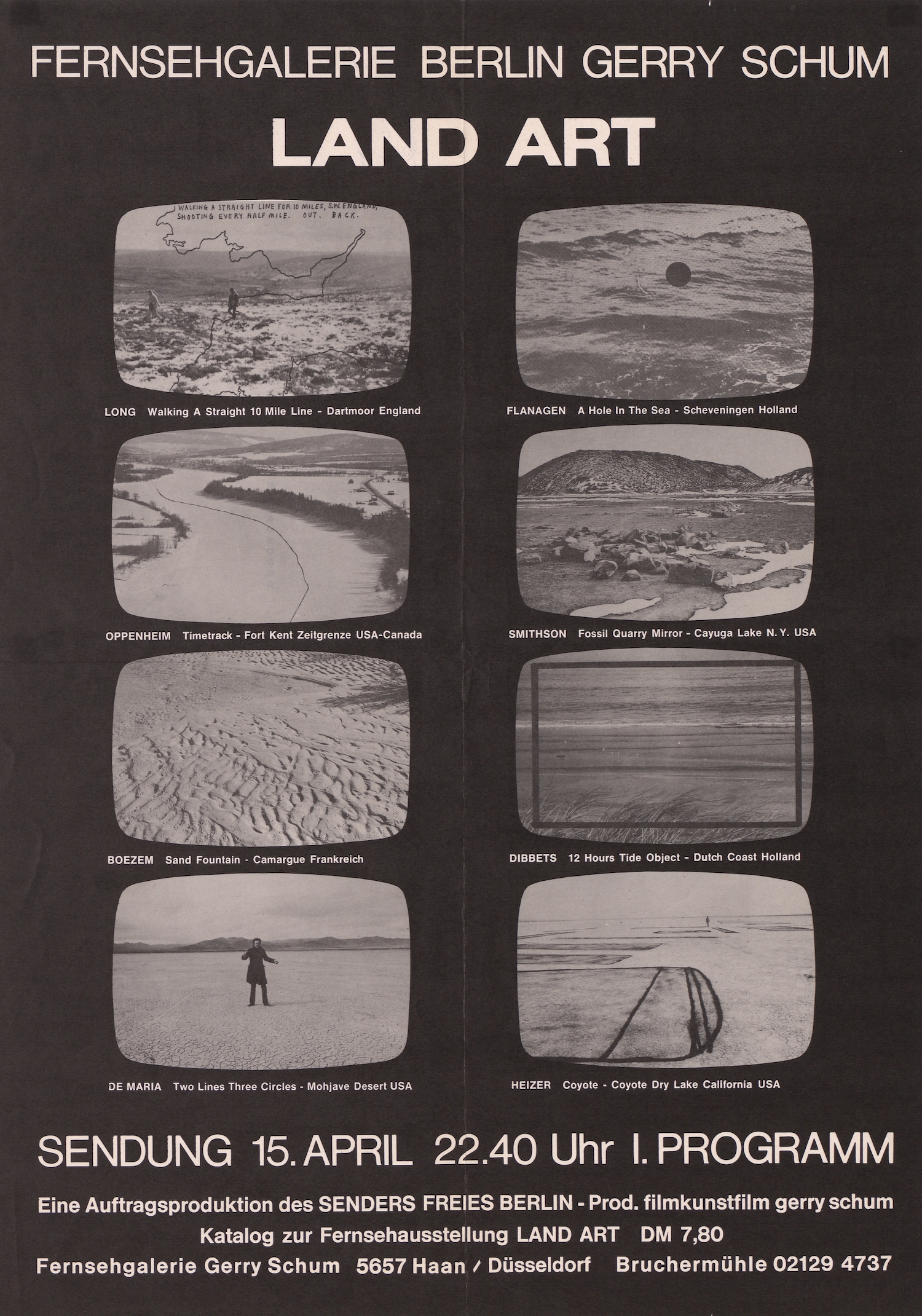 Further Information: Land Art was a television program created for Sender Freies Berlin (SFB), broadcast on April 15, 1969 at 10:40 p.m. on German television. Produced by Gerry Schum’s ‘TV gallery’, the film, which lasted approximately 47 minutes, contained sequential visual works by Richard Long, Barry Flanagan, Dennis Oppenheim, Marinus Boezem, Robert Smithson, Jan Dibbets, Walter de Maria and Michael (Mike) Heizer. Each work was presented without narration or commentary. Using television as a medium for art was an unusual and experimental approach at the time, and it unfortunately did not meet the public response hoped for by Schum. Therefore, the program was broadcast only once.

The black-and-white images printed on the front of the invitation were created by the artists especially for this presentation and refer to their individual artistic contributions to Land Art. Slightly bulbous and with rounded corners, they are reminiscent of the shape of a then-contemporary television screen. On the back of the invitation card, guests are invited to the (television) exhibition “opening”, which took place on March 28, 1969 at 9:00 p.m. in the SFB studio. The evening began with speeches from Gerry Schum and Jean Leering, director of the Stedelijk van Abbemuseum. Several scenes recorded during this time were later added to Land Art, as bookends both before and after the artists’ contributions.

The idea for the project came from Gerry Schum (1938–1973). As a filmmaker and cameraman, Schum was familiar with the medium of film and brought television’s visual range to Land Art, aiming to use it both as an artistic medium and as a tool to make art more accessible to a wide audience. In so doing, he questioned the exclusivity of the gallery as an exhibition space for art. As the artist produced their works in the landscape, Schum took the recording further than mere documentation; rather, each visual was based on a concept that was specially designed for the medium of television. Schum directed the camera and worked closely with the artists for the elaborate productions, shot at different locations in Europe and the USA. The often very different artists were united by the fact that they realized their work within the framework of Land Art—working with the landscape itself—as well as with interventions or with natural materials found in situ.

With Land Art, Schum tapped into an emerging artistic development of the late 1960s. The works of this movement, which were then not defined by name, primarily used artistic material from the landscape and mostly eluded mainstream reception. Interestingly, the movement was not concerned with an ecological aspect. A few months before Land Art was broadcast, works of this nature were brought together as Earth Works, which, after an exhibition in Virginia Dwan’s gallery in New York, received international attention for the first time. Some of the artists involved with Land Art, such as Robert Smithson and Richard Long, later made Land Art (also known as Landscape Art, Earth Art, Earth Works, Environmental Art or Ecological Art) the focus of all future artistic practice. Dennis Oppenheim and Barry Flanagan, on the other hand, developed their practice in other directions.

Images: The invitation card is part of the online collection of Archiv der Avantgarden, Staatliche Kunstsammlungen Dresden. The poster on this page and the postcards in the box on the right are part of the Sammlung Marzona, Kunstbibliothek – Staatliche Museen zu Berlin.

Each participating artist designed an invitation postcard to mark the LAND ART exhibition, organized by Fernsehgalerie Gerry Schum. Below you can see two of the cards, one by Jan Dibbets and one by Barry Flanagan, both located in the Marzona Collection at the (and courtesy of) Kunstbibliothek of the Staatliche Museen zu Berlin.