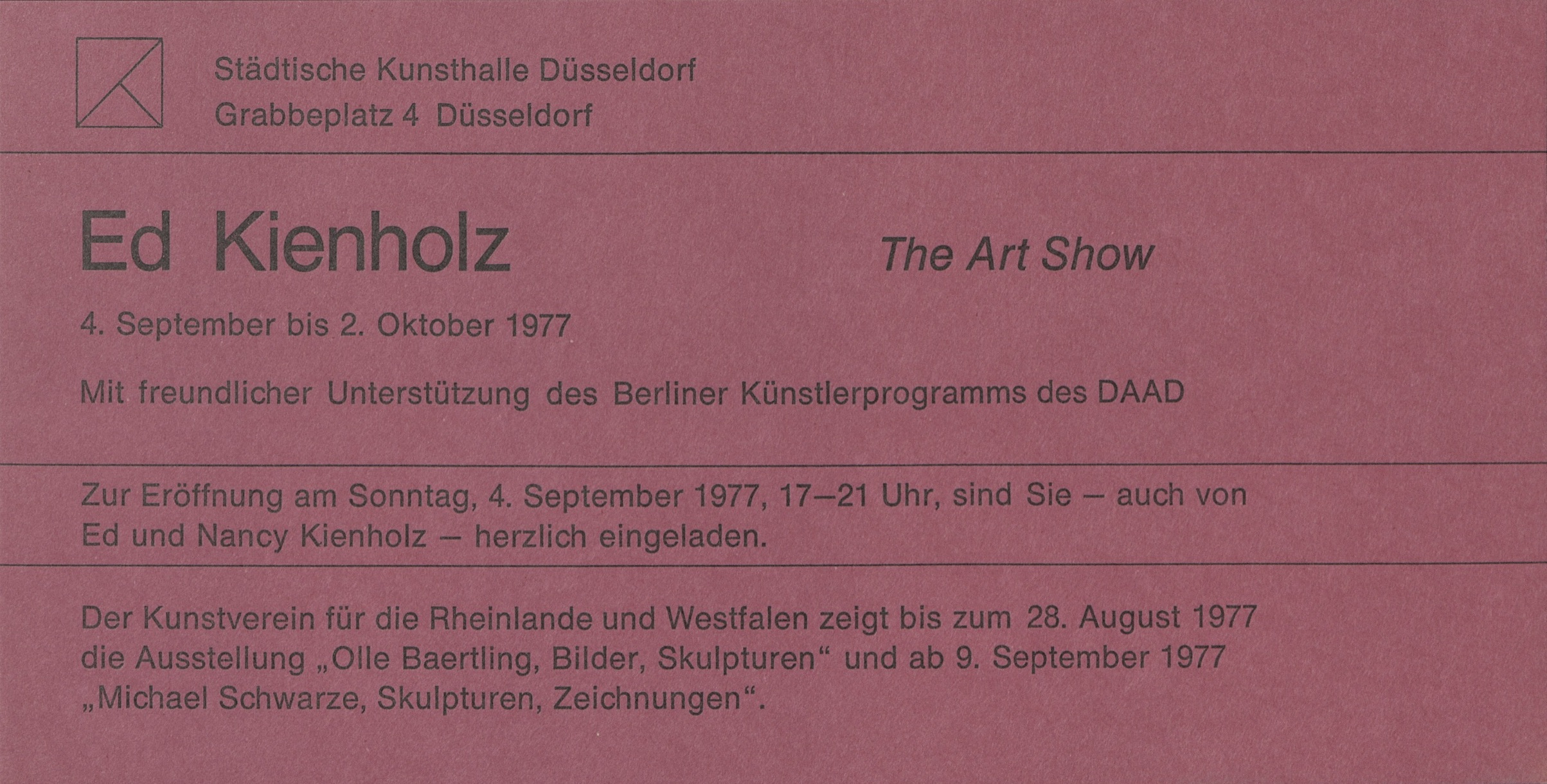 Further Information: Edward Kienholz’s satirical work The Art Show was first conceived in 1963, but was only later visualized on a concept board in 1967. On this concept board he explained that, ideally installed in a commercial gallery, the exhibition would present objects by a fictional artist named Christian Carry. Around the works would be placed sculptures representing exhibition visitors, inspired by typical vernissage guests such as curators, gallerists, collectors or museum directors. The sculptures would emit sounds: conversations about art, criticism, nonsense, and ironic comments. You can read more of these early notes in the document in the box on the right (in German).

He started working on the environment in L.A. in 1973 and finished it during his scholarship at the DAAD in Berlin in 1977. It was a touring exhibition that traveled from Berlin’s Volker Skulima to Centre Beaubourg in Paris, to the Kunsthalle in Düsseldorf (invitation above), to Galerie Apollon die Insel in Munich, before finally returning to Berlin, where it was shown at the Akademie der Künste in February 1978. In the catalogue accompanying the show, Kienholz published some thoughts and notes about the environment: “First, it is a gallery piece instead of a museum piece, even though it is by far the largest work I have done to date. Installing it in a commercial gallery is like putting on a glove. Conversely, museum space must be walled, equipped with commercial lighting tracks etc. The process is expensive and … difficult.” Kienholz also summarizes the some of the critical responses that he received, explaining that the “critical response seems to be mostly positive, the less than enthusiastic side commenting that The Art Show is too much an ‘inside art world joke’ and not worth the time and effort to make and show.… Nancy and I are satisfied with the way things are going and are waiting for The Art Show to finally metamorphose into a permanent gallery with real functions in the real world.”

Below you can see the cover of a catalogue for The Art Show, published in early 1978. It brings together photographs and some retrospective comments on the environment by Ed and Nancy Kienholz.

Notes on The Art Show by Ed Kienholz in 1967, held at the Archiv der Avantgarden.