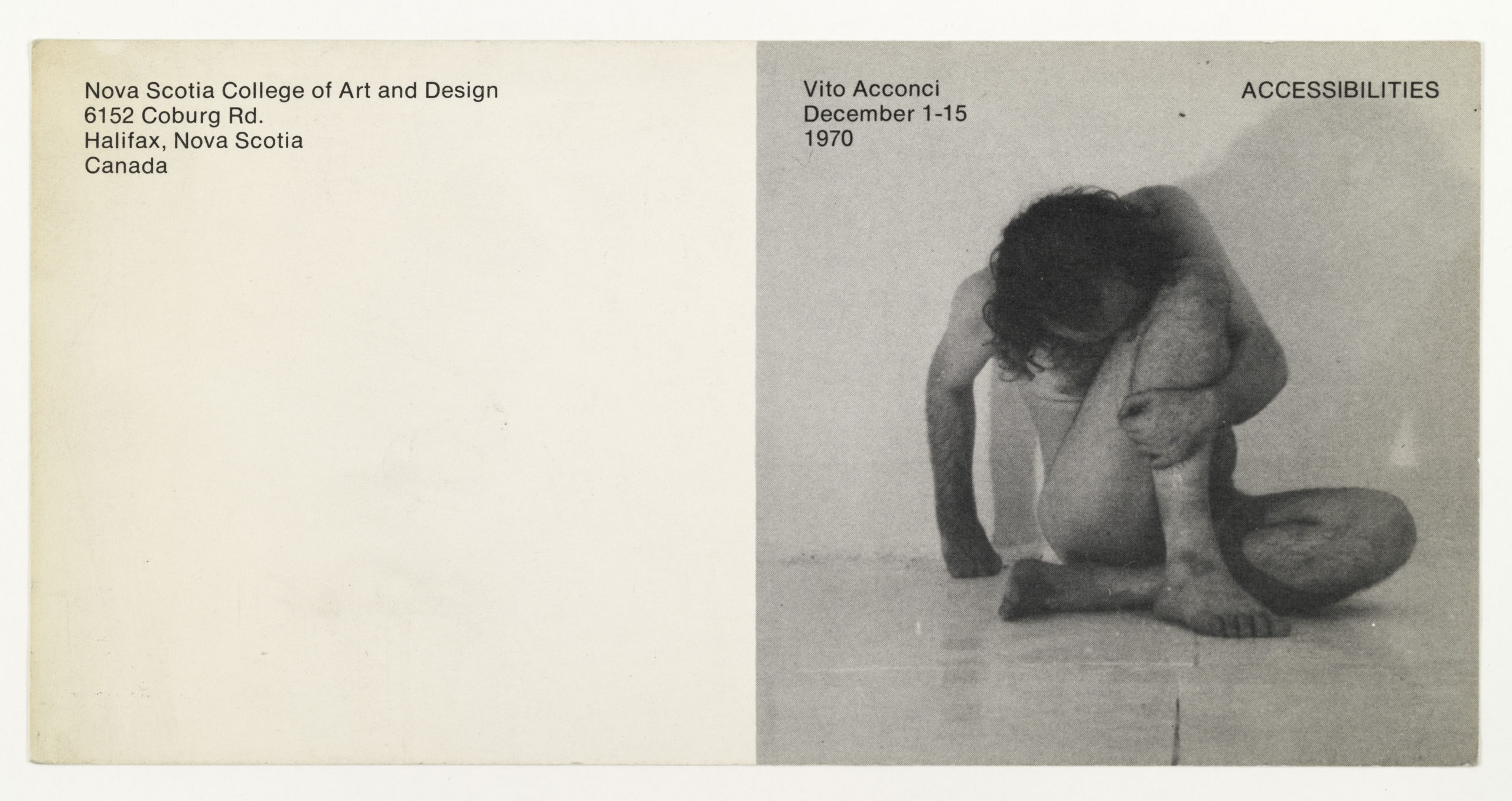 Further Information: Accessibilities, an exhibition by performance and video artist Vito Acconci, took place from December 1 to 15, 1970, in the Mezzanine Gallery at the Nova Scotia College of Art and Design (NSCAD) in Halifax, Canada. Acconci, also a poet, wrote extensive descriptions about the exhibition (as well as many other projects), from which we can today learn more about the works and performances shown. The exhibition included super-8mm films, such as Three Adaptation Studies, which showed various performative and motor experiments and exercises. In one of these studies, subtitled Blindfolded Catching, Acconci, whose eyes are blindfolded, throws and catches a ball; in Soap and Eyes, he douses his face with soapy water while trying to keep his stinging eyes open; and in Hand and Mouth he puts his entire hand in his mouth, choking on it. Acconci displayed notes and photos documenting his performance on a roll of paper. The picture printed on the invitation shows an earlier performance entitled Trademark, in which Acconci bit his naked body. The bite marks were then filled with ink and used to print with.

Also featured in the exhibition was Doubles, a workshop for reproducing Acconci’s artistic works, which were reduced to instructions for the students. This made it possible to dispense with his physical presence, while ensuring the students had access to the artist’s most important ideas and creative know-how. Indirect communication between artists and students via letter, telephone, or telegram was common at NSCAD, which was famous for its innovative forms of teaching.

Under the direction of conceptual artist Garry Neill Kennedy, who was appointed director at just 32 years old, NSCAD played an active role in the international art scene from the late 1960s onwards. In addition to Vito Acconci, guest professors included the artists Joseph Beuys, Hans Haacke, and Yvonne Rainer, and the art critic Benjamin Buchloh. John Baldessari’s famous work I Will Not Make Any More Boring Art was organized by the lithography workshop.

Further Links: A description of the exhibition Accessibilities is available via the archive of Nova Scotia College of Art & Design: nscad.cairnrepo.org/. Many video works by Vito Acconci can be seen in full length via http://ubu.com/film/acconci.html.

Images: All images from this invitation and other examples of Vito Acconci’s invitations and work are part of the Sammlung Marzona, Kunstbibliothek – Staatliche Museen zu Berlin.

Vito Acconci, who taught at Nova Scotia College of Art and Design, held two exhibitions at the Mezzanine Gallery. A year after Accessibilities, Acconci created a flyer for his second show in 1971 that contained a description of what would happen in the event of his death during a flight from New York to Halifax, of which he was afraid.

Typical for Acconci’s exhibition invitations, the flyer for his 1970 performance Room Situation at Gain Ground contained a simple, typewritten description of what would happen during the performance.

Below are descriptions and notes by Vito Acconci, published along with his exhibition at John Gibson in New York in 1971. The descriptions address ideas around performance that he was concerned with at the time, including Accessibility, Action, Strategy and Interaction.

Below is an invitation to Acconci’s show Pornography in the Classroom, held at CARP in Los Angeles in 1975.

Below is an invite to Acconci’s film series at Artists Space in New York in 1976.