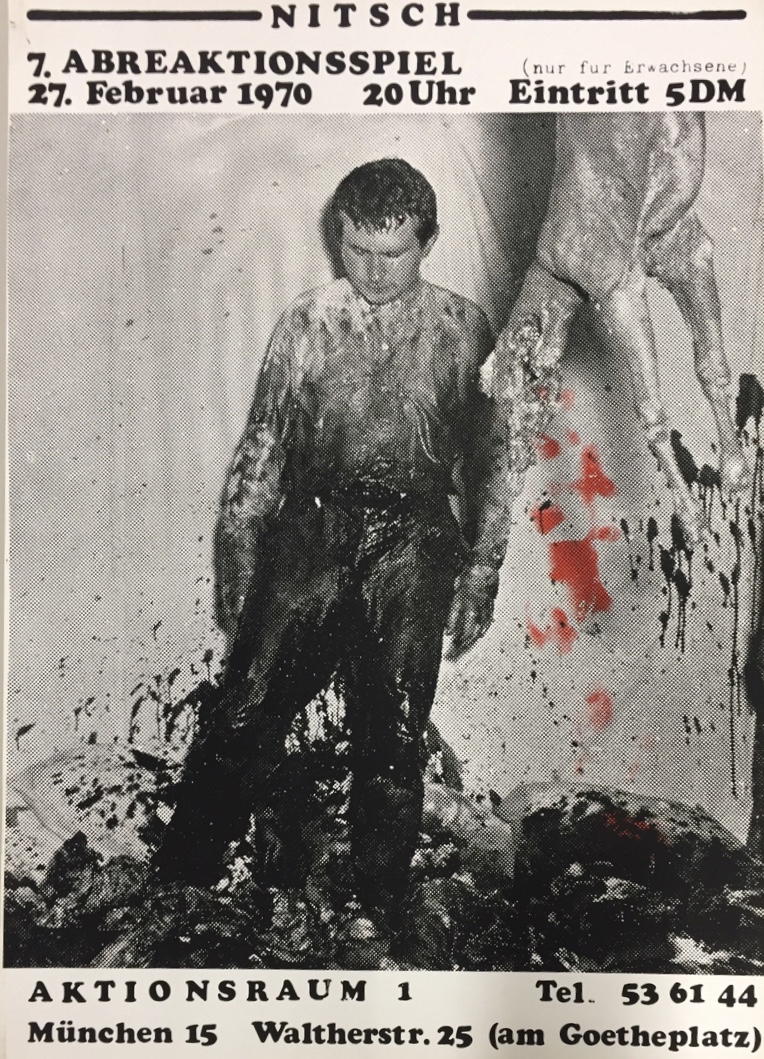 Further Information: 7. Abreaktionsspiel (translating as the 7th reaction game) by the Austrian action artist Hermann Nitsch was due to be held in Munich on February 21, 1970 at 8 p.m. However, before it could begin, police officers raided the building and blocked the entrance to Aktionsraum 1. Some prior difficulties had already arisen with the Office for Public Order and the necessary permits had been refused, meaning the performance was eventually banned. The next day, 7. Abreaktionsspiel took place as a closed event with fewer visitors, privileging members of the press and those directly involved in the work. Nitsch encountered many problems with authorities in Vienna, even occasionally resulting in imprisonment.

To this day, the slaughter and sacrifice of animals, and use of their carcasses and intestines, are at the center of Nitsch’s Orgies-Mysteries-Theater, the aim of which is to guide the audience through extreme conditions towards catharsis. The participants, most of whom are naked, embark on sexualized activity directed by Nitsch, often using Christian symbolic language. In Munich, the invitation to Nitsch’s reading and the 7. Abreaktionsspiel caused both excitement and annoyance among the general public. However, Nitsch’s was not the only art action in Aktionsraum 1 that was censored by the authorities.

Aktionsraum 1 was opened in 1969 by Eva Madelung, Peter Nemetschek, and Alfred Gulden to offer a place for young artists creating performative and socially critical artworks. In addition to Nitsch’s 7. Abreaktionsspiel, works such as Günter Brus’ Zerreißprobe (1970) also found acclaim. Numerous projects and campaigns took place in Aktionsraum 1’s old factory hall on Wahlterstrasse over the course of year. Aktionsraum 1 offered space for discussions, readings and lectures, as well as a space for new art forms.

Images: Images of this invitation and all other archival documents shown on this page are part of the online collection of Archiv der Avantgarden, Staatliche Kunstsammlungen Dresden.