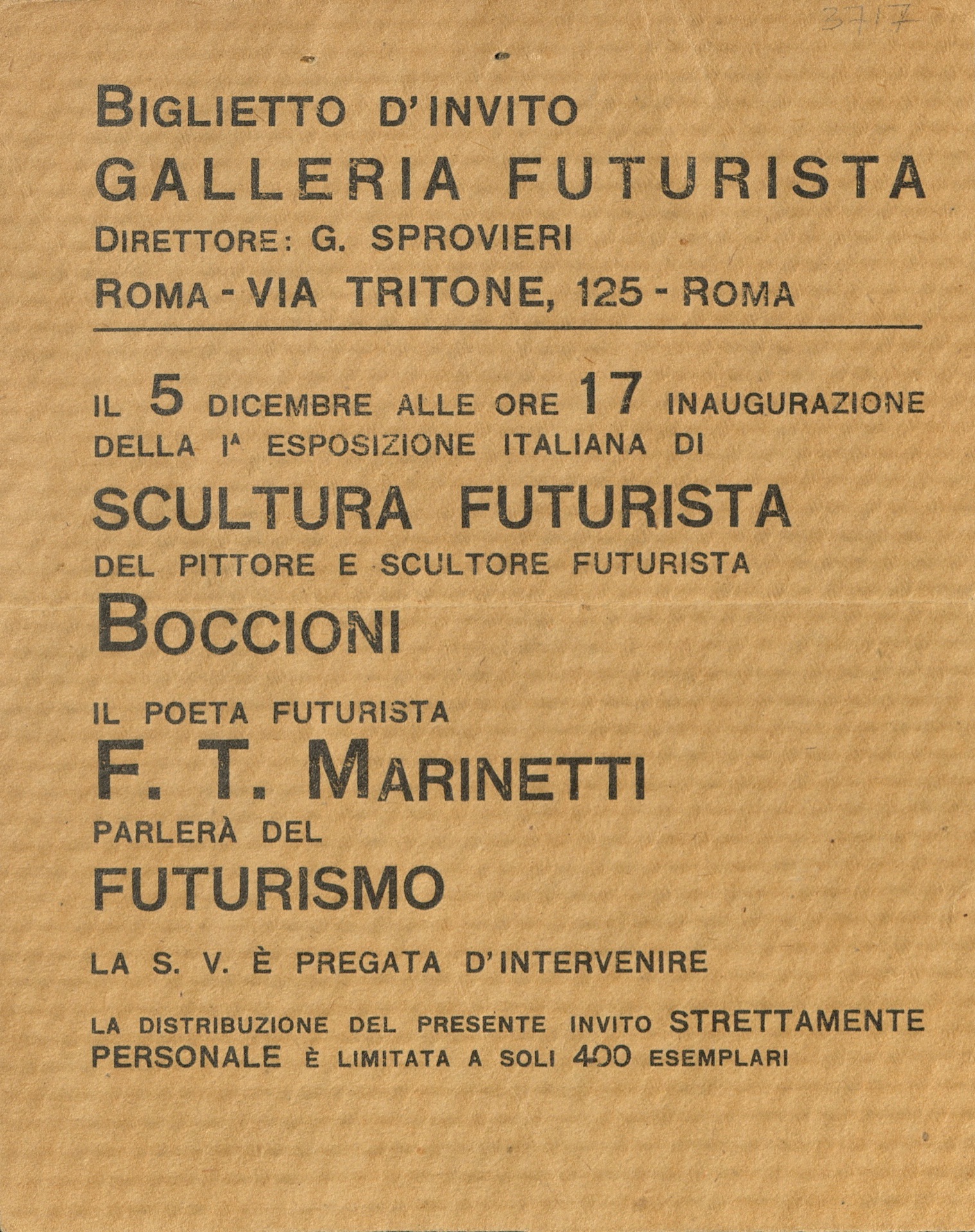 Event: Marinetti speaks about Futurism during the opening of Boccioni’s sculpture exhibition.

Further Information: Run by the art dealer Giuseppe Sprovieri, Galleria Futurista in Rome presented sculptures of the painter and sculptor Boccioni. Typically for the Futurist movement the  public evenings “included recitations of political statements and artistic manifestos, musical compositions, poetry and paintings.” Such serate (Italian for evening party) were held since early 1910s in Trieste and later became an established format for the movement. The art historian Claire Bishop further writes about this period: “From the beginning, Marinetti was aware of the need to reach a broad audience to realise his cultural and political goals of overthrowing the ruling bourgeoisie and promoting a patriotic, industrialised nationalism.” In fact, the first Futurist manifesto by Marinetti was published in Le Figaro on 20 February 1909. (From Claire Bishop, Artificial Hells, London: Verso Books, 2012, 42).

Boccioni met F.T. Marinetti first in 1910. For his opening Marinetti was invited to speak about Futurism during the opening event, and to advertise its ideas and its manifesto (which you can read in the invitation to the Futurist exhibition at DER STURM, in Berlin).

Below you can see an invitation card to a lecture that F.T. Marinetti held at Teatro Eden Padua in 1926 on the subject of FUTURISMO E FASCISMO. The lecture, according to Willard Bohn, author of the book, The Other Futurism: Futurist Activity in Venice, Padua and Verona was extremely crowded and Marinetti was able to move and activate the audience immensely.

There are several catalogues from the early Futurist movement in the collection of the Archiv der Avantgarden, including this important first show of the futurist painters in Naples. Titled Prima Esposizione di Pittura Futurista the 1914-show, at Galleria Futurista included the artists BOCCIONI, CARRÀ, RUSSOLO, BALLA, SEVERINI and SOFFICI. The gallery was run by Giuseppe Sprovieri.