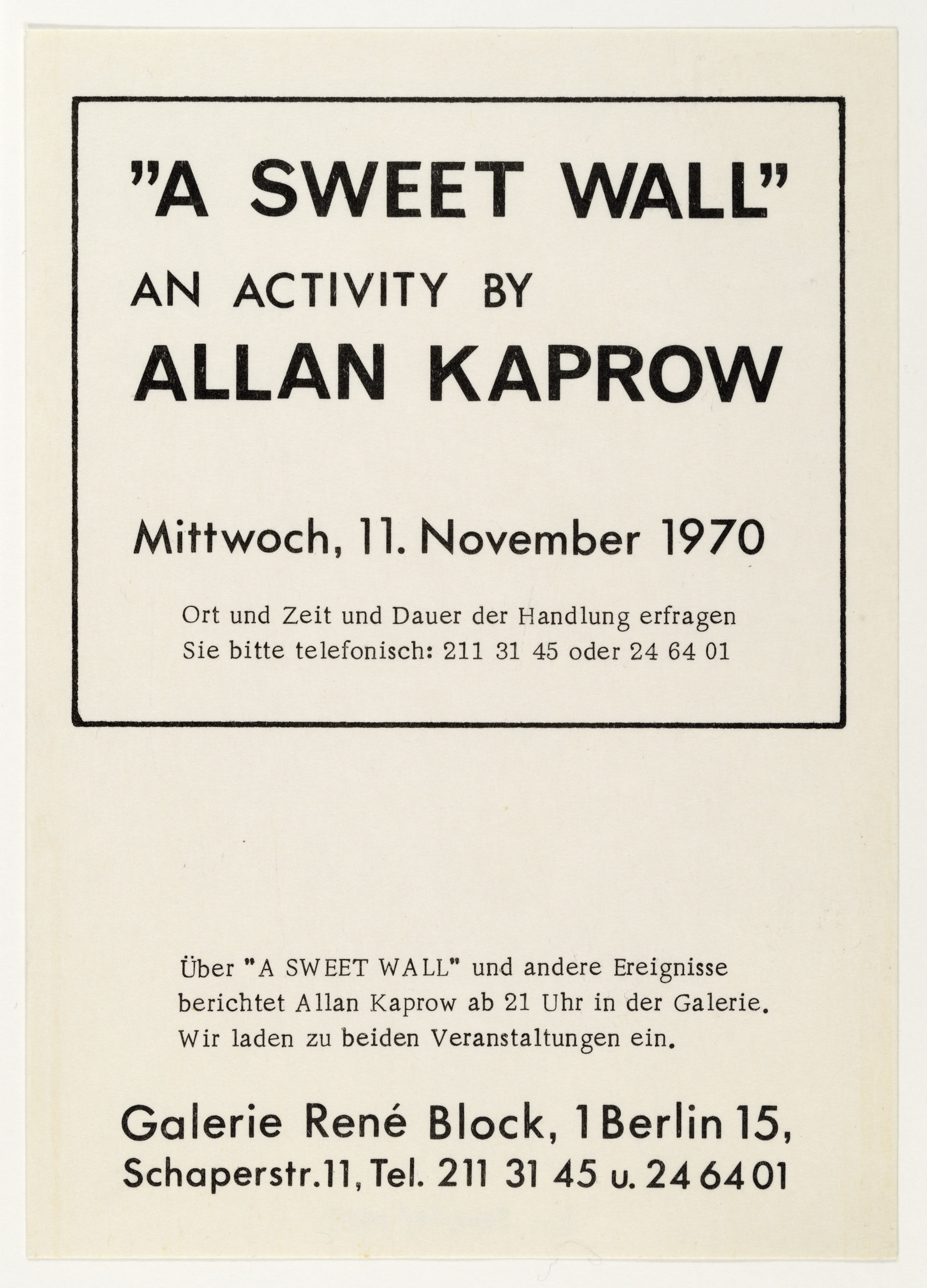 Opening: November 11, 1970, place and time of the activity available on request by phone (Köthener Strasse in Berlin-Kreuzberg). A talk with Allan Kaprow took place at 9 p.m. on the same day at the gallery.

Further Information: During his time as a fellow with the DAAD Artists-in-Berlin program, Allan Kaprow and a group of performers gathered for A Sweet Wall, a happening close to the border of the Berlin wall. After building a proxy wall out of cylinder blocks, bread, and jam, their wall was then collapsed by the group. Kaprow, who passed away in 2006, wrote a statement for Sweet Wall in his Activity Booklet. In this text he explains:

“Some art containing political references attempts to affect social change as directly and quickly as possible. Its themes are blunt and the moral choices are clear. In other cases, the art’s political content is a metaphor intended to play upon an already awakened consciousness. The politics are implicit, and are imbedded in complexes of other human and cultural meaning.… Sweet Wall, looking back six years, contains ironical politics. It is parody. It is for a small group of colleagues who can appreciate the humor and sadness of political life. It is for those who cannot rest politically indifferent, but who know that for every political solution there are at least ten new problems. Sweet Wall was free-standing. It enclosed nothing, separated no one. It was built in a desolated area close to the real Berlin Wall. The real wall divided a city against itself. Sweet Wall was put up within hours and then was easily knocked down by its builders. The Berlin Wall was constructed for impregnability and will stand until either a war or a political act by a later generation removes it. The blocks of Sweet Wall were bound together by fresh bread and jam (an oblique reference to the Biblical Israelites), while those of the Berlin wall were joined by cement. As parody, Sweet Wall was about an idea of a wall. The Berlin Wall was an idea, too.” (Allan Kaprow in Art as Life, by Allan Kaprow and Annette Leddy, Getty Publications, 2008)

Allan Kaprow was the leading pioneer of happenings and strongly influenced the evolution of the environmental genre. As one of the first artists to participate in the Fluxus movement, he also had a considerable influence on other participants. In 1966, he released an audio guide on LP, instructing others on “How to make a happening” with mass art. https://www.soundohm.com/product/how-to-make-a-happening/pid/11567/

Further Links: Images of the performance can be seen via exhibits.haverford.edu/

Image: This invitation is part of the Sammlung Marzona, Kunstbibliothek – Staatliche Museen zu Berlin. The images from ROUTINE belong to the collection of Archiv der Avantgarden, Staatliche Kunstsammlungen Dresden.

Allan Kaprow published many facsimiles and catalogues with detailed descriptions and photographs of happenings or, as he called them, activities, that could be re-staged by others. They similarly served as a documentation of his practice. Below you can see the catalogue for ROUTINE, from 1975, which is part of the collection Archiv der Avantgarden, Staatliche Kunstsammlungen Dresden.