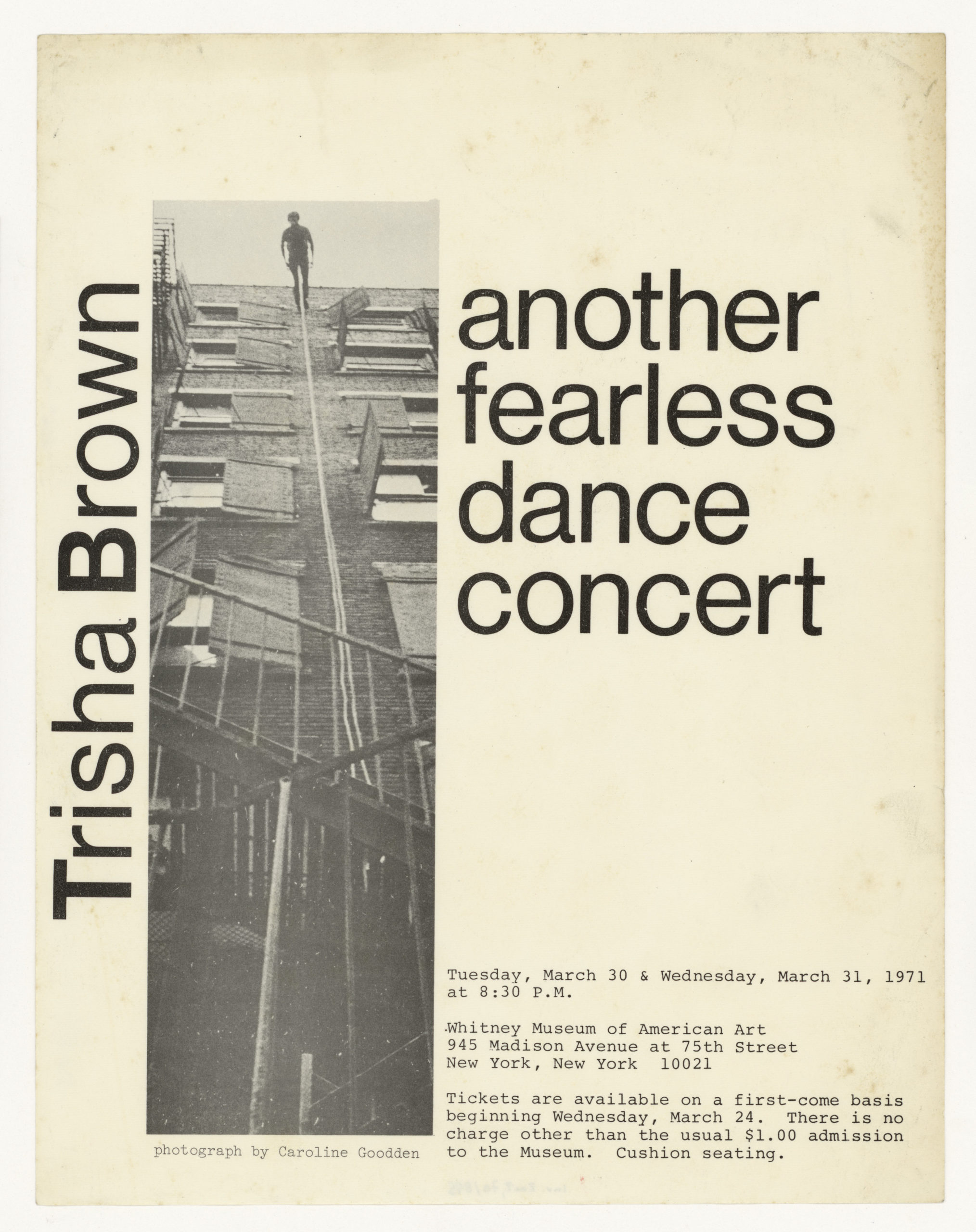 Further Information: In March 1971, Trisha Brown’s Another Fearless Dance Concert at the Whitney Museum of American Art included five selected pieces, each dealing with the notion of gravity. The poster for the event features a photograph of one of Brown’s earlier pieces, Man Walking Down the Side of a Building (1970), taken by Carol Goodden.[1]

The five pieces included in Another Fearless Dance Concert were Walking on the Wall (1971)—the main piece—followed by Leaning Duets II (1971), Falling Duet I (1968), Falling Duet II (1971), and Skymap (1969). The latter did not include any physical dance. The performances took place on the second floor of the museum, which was cleared of all other art objects, leaving an empty space for the dancers. Every possible plane was filled with dance: the floor, three walls, and the ceiling.[2]

Walking on the Wall was a piece for seven dancers (Carmen Beuchat, Trisha Brown, Douglas Dunn, Mark Gabor, Barbara Lloyd, Steve Paxton, and Sylvia Whitman), who were suspended horizontally in the air with their feet touching the perpendicular walls. Based on the idea of a group exercise, the dancers walked on the walls, moving across this hitherto inaccessible plane. The three duets, Leaning Duets II (performed by Carole Berman, C. Beuchat, Victor Brocapas, Ben Dolphin, Kitty Duane, M. Gabor, Caroline Goodden, Suzanne Harris, Mike Howard, Jon Kalina, Ginger Michels, Richard Nonas, Leslie Orr, Darby Ortolano, and Fernando Torm), Falling Duet I (T. Brown and B. Lloyd), and Falling Duet II (T. Brown and S. Paxton) were simpler studies with a partner. Skymap, on the other hand, was a dance created solely using a vocal sound score, with which Brown guided the audience on an imaginary journey through the United States. The sound travelled from the sixth surface, more difficult to access: the ceiling.[3]

Brown (1936–2017) was an American dancer, choreographer, and one of the founders of Judson Dance Theater in New York. In 1970, she founded the Trisha Brown Company, which now continues to work on her legacy, keeping her works alive for the next generations.[4]