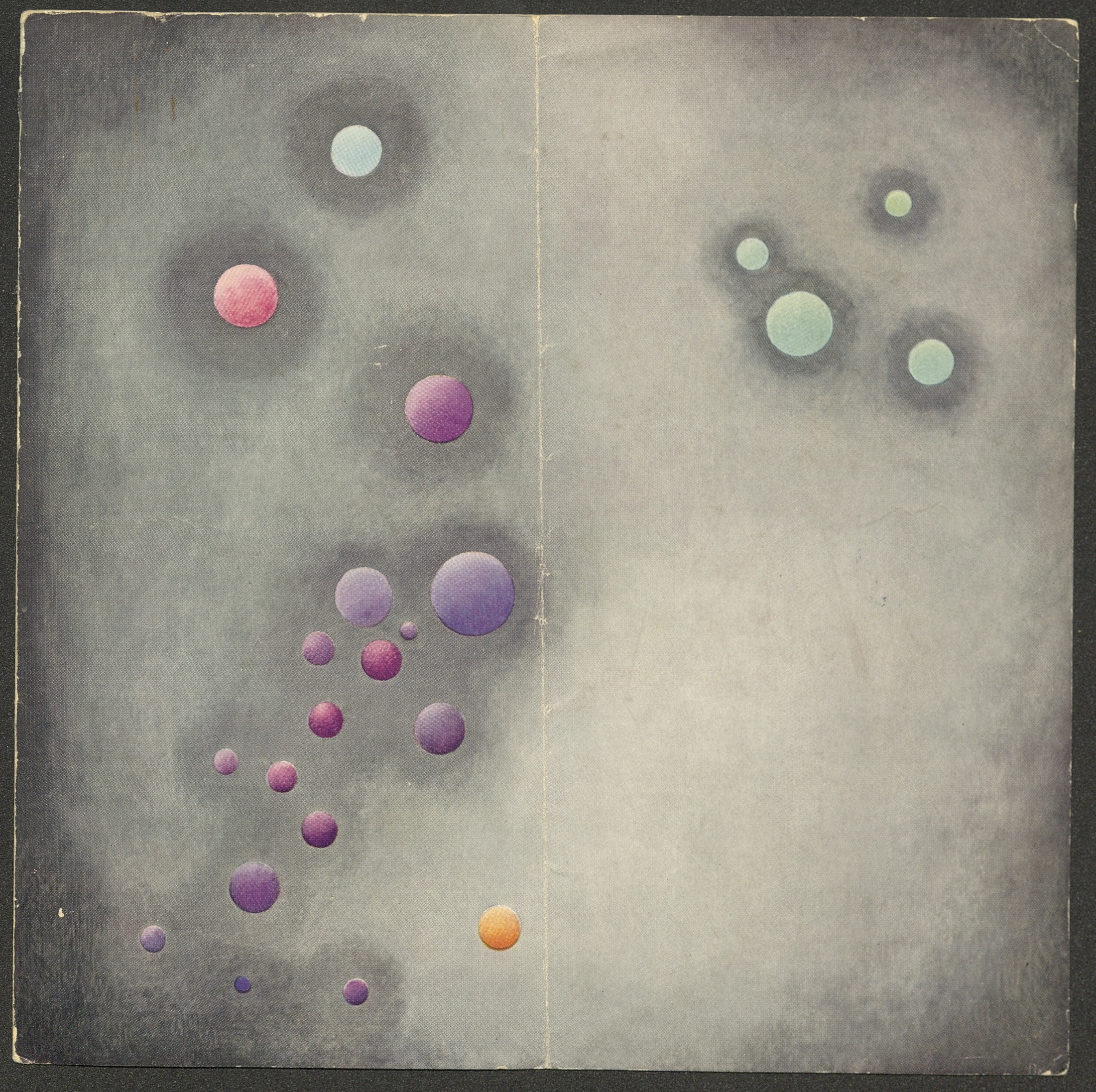 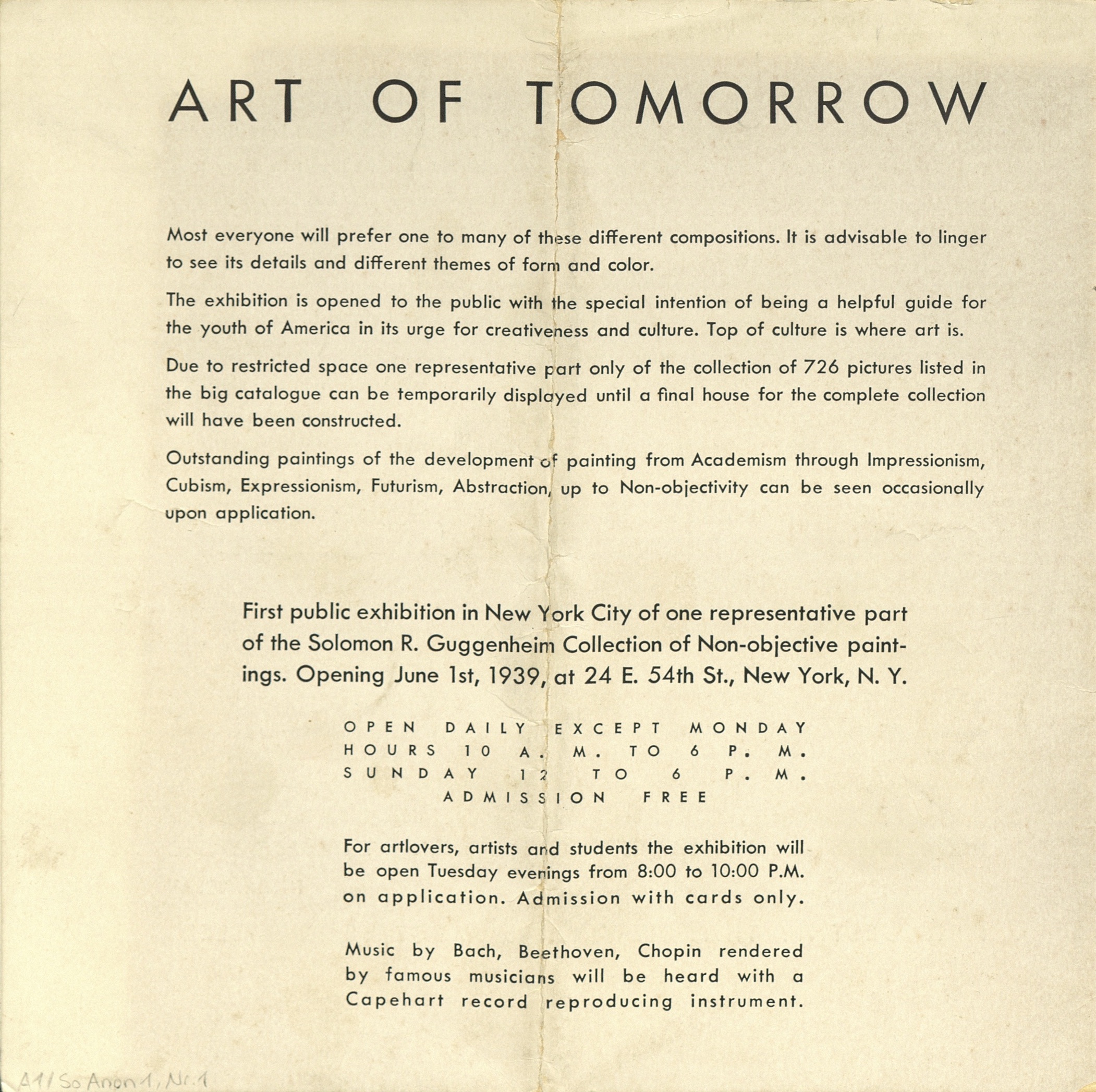 Further information: On June 1, 1939, the Solomon R. Guggenheim Collection of Non-Objective Painting opened in New York with its first exhibition, Art of Tomorrow. Taking place in a former car dealership at 24 East 54th Street, visitors were able to see European and American works of non-representational art, compiled by the artist, curator, and the museum’s first director, Hilla von Rebay.

Ten years earlier, Rebay had convinced Solomon Guggenheim to begin collecting non-representational art. While such strikingly new artworks had already caused a sensation in Europe, in the US the years following the Great Depression had seen focus largely shift towards art with more explicit social relevance. Despite this, Guggenheim and Rebay brought their forward-facing art to New York and the exhibition became legendary: with the opening of the Solomon R. Guggenheim Collection of Non-Objective Painting, Art of Tomorrow laid the foundation for what later became the Solomon R. Guggenheim Museum, today one of America’s most significant art museums.

At that time, only a small but representative section of the Solomon R. Guggenheim collection could be shown in the limited space of the dealership. According to the exhibition catalog, the collection included 725 works in total, 215 paintings by Rudolf Bauer, and 104 pictures by Wassily Kandinsky. The curator’s preference is evident on the invitation card: an oil painting by Bauer, titled No. 127, Orange Accent. The show also featured works by 24 other artists, including Hans Arp, Kurt Schwitters, Juan Gris, Fernand Léger, César Domela, László Moholy-Nagy, Friedrich Vordemberge-Gildewart, and Maria Helena Vieira da Silva. Hilla von Rebay also showed 14 of her own paintings in the exhibition under her curatorial direction.

The idiosyncratic presentation of the works, which followed Rebay’s spiritual understanding of non-representational painting, certainly contributed to Art of Tomorrow’s legendary reputation. On the back of the invitation card she wrote: “Non-objectivity is the realm of the spirit.” According to Robert Rosenblum, who attended the Museum of Non-Objective Painting as a teenager, music by Bach, Beethoven, and Chopin played during the opening event. Incense sticks were used in the gallery rooms. The walls of the exhibition rooms were covered with pleated, gray velour. Sofas in the rooms invited visitors to look closely at each work.

Further links: The exhibition catalog has been digitized and is accessible via: http://archive.org/stream/artoftomorrowfif1939gugg#mode/2up

The two following catalogs accompanied the Art of Tomorrow exhibition. ‘Fourty-one (sic) reproductions from the collection of the Solomon R. Guggenheim Foundation for non-objective painting’ served as a catalogue, while the second publication collected ‘Public comments made about the exhibition’. Both were published in New York City in 1939.

“Public Comment about Creative Painting: ‘When you once see it and accept it within yourself, nothing else will do’ ––” Quote from ‘Public Comments on Art of Tomorrow’